Congratulations to the Kenyan athletes Kimetto and Jeptoo… another marathon (this time in Chicago), another double win: a new course record set for by the men, and first under 2 hr 20 min finish for women in 2013! Woo hoo!! Nice to have positive news about Kenya for a change, right? But then the world keeps asking: what IS IT about these Kenyan marathoners and their annoying prowess that no one seems to be able to beat, except Ethiopians or the occasional Mo Farah (Somali Briton who trained in Kenya before he sprinted to fame last Olympics)???? Well, I got a chance to visit Iten, the international marathon training and County headquarters of Elgeyo Marakwet, now proudly branded as the ‘County of Champions’. I have to say that it was an awesome opportunity to marvel at yet another be-yuuu-tiful corner of the country. A chance to run and… Escape! 🙂

Elgeyo Marakwet County is located within the Rift Valley Province of Kenya and has total population of about 370,000. Their treasure of resources include the Kerio Valley, walled in between the Cherang’any and Tugen Hills, Flouspar mining, arable farming and of course Sports Tourism. Hundreds of international athletes visit the county each year to train alongside the world champions, as well as sports researchers to study the whys and hows of their intriguingly persistent outstanding performance in the long distance races.

An interesting story is told of how an athlete from Europe, a champion by his own right and in his own country, was recently in the area doing his practice run in the wee hours of the morning up 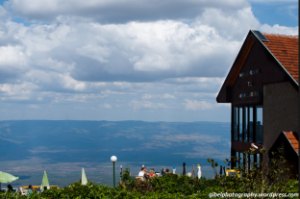 the hilly training routes. A group of school-going children caught up with him and ran alongside for a bit, cheerfully shouting greetings to Mzungu. He didn’t change pace but wondered about his abilities a short while later, when the kids picked up their speed gleefully shouting ‘bye mzungu’ as they sped off and disappeared into the distance!!! Another athlete came to train for the 800m with the likes of Rudisha and gave up not too long thereafter declaring that he was looking for the lady athletes, saying he’d be more likely to ‘keep up’ with them than with his gendermates!

Next time you are in the area or looking to take a break, make sure you seek out the Kerio View Valley Hotel in Iten. Built way back in the 90s, it’s strategically located on the Valley’s edge and offers an uninterrupted view of the valley and its magnificence. It’s a regular meeting place for the champion marathoners and those they inspire (both foreign and local) though it’s neither easy to see them in action – am told they usually do their practice starting at 4 am, nor see them at all (probably too busy winning marathons all over the world)! What am sure you will see are all the potential and future marathoners in the form of the little children walking / running to and from school. 🙂

Whatever your interests or how much of Kenya you’ve already seen, this is a worthwhile 1-2 hour drive from Nakuru. Steer through Baringo County… up, up and up! the escarpment to Kabarnet then doooown to the valley floor, cross the Kerio River then uuuuup towards Iten! Enjoy the endless beauty of the changing landscape and get a feel of the terrain that rears and builds world class marathoners… Truly a County for Champions! A magnificent… Escape!