The Elections are over, the school holidays are here and it’s pouring cats and dogs everywhere! Kids are bored and the first national holiday under the new government is coming up. What so fast? Do you have anything planned for the one day ‘off’ that’s falling smack in the middle of the week? Yeah it’s only one day but you could surprise everyone with a new discovery in a county near you. So let’s Escape! …

“In the ancient land of Deighton Downs, at a time of great hardship, adventure, and loneliness, a young African found himself at the foothills of the Aberdare Ranges overlooking the Laikipia plains. As he grew up there, enveloped in a harsh wilderness, unto him came an immortal dream. That dream now stands as…The Tafaria Castle & Country Lodge. EST 2012 AD.” 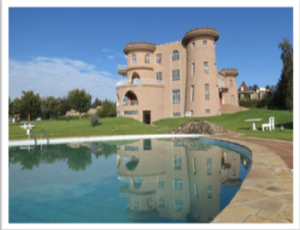 Set on vast acres of land sitting across two counties of Laikipia and Nyahururu is the most amazing structure of modern Kenya, A real life Castle named Tafaria (middle name of the dreamer owner, George Waititu) it sits on a hill and on a clear day enjoys the breathtaking double view of Mt. Kenya on one side and the Aberdare Range on the other. Creatively designed cottages litter the grounds, each named as Knights, Damsels or Vikings like the medieval times, with the grandest of them all at the top of the castle dubbed the Lords Room.

Its location is nearly equidistant from Nyeri and Nyahururu, the entrance clearly marked off the main road, though you need to do another 4 km of dirt-ish road to get to the Castle Gate. Its design is so well hidden that you won’t get a glimpse until you are just but a few metres away. And then you gasp for breath at the sheer beauty of it all – it’s well worth the drive out there. 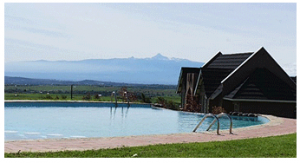 You can do lunch and/or a movie (if you book in advance) and then take a stroll back into time in the form of a courtesy tour of the fortress and its expansive grounds complete with an auditorium. The story of the building of the castle is as fascinating as the idea behind it. I must warn you that there’s a magical spell in the air that could hypnotize you into wanting to stay much longer than you planned!! And when you finally break it, you should not leave without crossing under the Barbican to leave your permanent mark on the visitor’s book of life. (FYI, I’ve been there, only twice! And I’d go back again…)