So… the ‘month of Looove’ and all its hype and blah, blah (depending…) is nearly over. Sigh, hope it was nearly as great as you planned it to be. Even if it wasn’t, start now and plan for next year! Meanwhile, it is at such times that some think that the other gender has it soo easy. Some guys envy the ladies because they get to enjoy being pampered and spoilt by design, demand or black mail (… or else!). Plus they doll themselves up so pretty, it’s hard not to succumb! And on the other hand, the gals think it’s unfair that the guys get to choose how (or if) they will spoil the gal, and therefore enjoy the intensified attention. Yes, the grass always looks greener on the other side of the fence (or so it seems).

Now, for those who have entertained ideas of getting to know how it feels to be of the opposite sex, apparently your dreams are valid! Believe it or not, you can seek a gender change without visiting a hospital, or undergoing a series of wierd operations; you won’t need drugs, or a lot of money (well not loads of it), and you won’t even need to fly out anywhere. Yup! A local solution, to an increasingly emerging ‘problem’ in this our global world. Really you say? Uh-huh… indulge me some and let me explain… 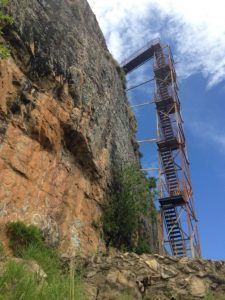 Located at the heart of the 8th largest County in the country, about 180km from Nairobi (eastward) and about 3 and half hours away, this rock… Rocks! 😉 It can be seen from miles around, as it is said to be about 90 feet in height, spans 3 acres at its bottom and 1 acre at the top (from which on a very clear day, you may be able to see both Mt Kenya and Mt Kilimanjaro). Apparently it is also referred to as the ‘growing rock’, because the many trees around it never seem to change in relative size, yet they keep getting taller. A few years back you could climb to the top to enjoy the magnificent view via a series of metallic stairs erected alongside the rock face, but over the years their use became increasingly ominous and are now sealed off – quite a disappointment when we went on a discovery journey there last December!!

The legends of how the rock came to be, as well as the extent of its magical powers abound and vary depending on who’s telling. Ostensibly, the rock is female and it is said that she wept and bled throughout the building of the staircase, crying ‘Noooo…. Leave me alone’ (in the local kamba dialect). Reportedly, the builders suffered many weird injuries and medical conditions, so much so, that no further construction works could continue once they were done with the staircase. Nevertheless, Nzambani rock moved on, and remained generous with her main enchantment: to change your sex, all you need to do is walk around the rock SEVEN times, and by the time you are on the seventh round you will have succeeded!! No drugs, no monies (well you pay a small token fee to gain access), no terms and conditions… just walk! What??!

So while we were there, admiring its grandeur in sheer size, we sought some clarifications… In which direction was one to head… clockwise, anti-clockwise, and how would one determine this? And what if one couldn’t finish the seven rounds, would you be left genderless? And what if one went in the opposite direction, would a ‘she’ become more lady-like or a ‘he’, more masculine, perhaps? What if one was transwoman or transman, how would one be ‘sorted’? (Er… note to reader, google!)… To each of the answers, the mzee caretaker patiently answered, ‘why don’t you try’? And we thought hmmmm…. if only we had arrived earlier than the afternoon, we might have considered it, especially the counter clockwise direction (and if we had confidence in which direction that was)!! Needless to say, we settled on hiking up the short distance to the rock base and marvelled at the ab-so-lu-tely stupendous view of the expanse across the county and far, faaaar beyond in silence, as we envisioned the massive potential of future development atop this vantage point. It was hard to get away, but it was getting late.

As you can imagine, our journey back was so animated, we barely noticed the time fly by… we were wondering, at which point of ‘the walk’ would one start to see (or feel) changes… round 3? Or 4? Or maybe 5? By which time, would a man start to feel (or see) his chest expanding, or possibly popping out? And would a ‘she’ possibly feel/see a flattening in progress…?? Would there be a deepening or less deepening of voice (depending)… and at which point would the changes be applied or evident elsewhere, perchance (ahem, ahem… hahaha!!)…??? Would you reeeeally need to count the rounds as you walk, or just… um… check or feel out your progress? And what if you changed your mind at some point, would you be able to walk backwards to ‘undo’, or just walk another 7 rounds? And was limitless or were you allowed only so many ‘conversions’???

And if you are also wondering, I’ll tell you the same thing we were told… ‘Why don’t YOU try?’… At this point, no one can guarantee you quality or success, but you know what? We would all learn from your experience, right? So what you waiting for? Somebody! Anybody! Go on… pick a random weekend or timeout, inspire your significant other to be daring and ‘try out’ Nzambani Rock as your next adventure… Escape!