Have you ever trailed a hiking group, panting to keep up and wondering where your legs are even though they still seem attached, somehow moving you forward??!! That was me, in Feb this year… a good friend convinced me to tag along, ostensibly to beef up the numbers and coz he’d heard I run marathons (the half ones of course). He’d been advised by the trainer to invite only those who are very fit. I mightn’t have used quite that description on me, but anyway… here I was, confirming more by actions than talk, that indeed, I was very not fit! To be fair though, my stamina was more attuned to endurance in running long distances, and not at all for hiking endless steeps. Plus this group happened to be doing their last preparation before a planned ascent of Mt. Kenya the following weekend. Nonetheless, they were very nice, and indulged the slowest in the pack (me) throughout by making probably many more stops than they otherwise would have. FYI, I survived, barely and gathered my joyful, but very exhausted, conquering body mass up the 7 flights of stairs home, swearing that not only would I be back there to do a better job, I would follow their inspiration and respond to the call of a getaway to a Mountain Escape! 🙂

Hiking up a Wind Farm, Ngong Hills
The location was the nearby 7 hills in Ngong. It was a group of 13, including 2 trainers and one other hiker who was like me (not part of the mountain climbers but invited to the hike; for the record he kept up with the rest and therefore honourably qualified). It took us about 1.5 hrs to navigate the heavy traffic all the way from Nairobi City Centre to the base of the hills. It was an interesting ‘update’ on developments along the way, including the new-ish fancy Milele Mall in Ngong Town, with its environs made vibrant by the dense population milling around. A brief stop to pick-up a 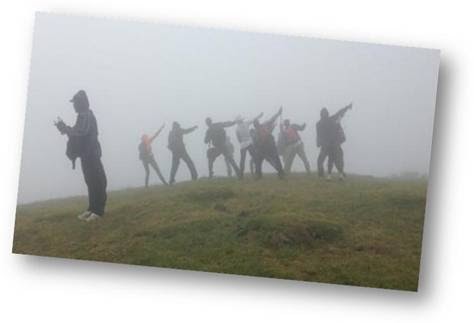 pair of KWS rangers for company, park the bus, make forest reserve entrance
payments, and set off up the first hill, targeting to conquer the highest point @2,460m above sea level within 2-3 hrs. The start was a steady walk straight into mist so thick we couldn’t see our hike-mates 5 metres ahead! We could barely make out the wide base of the scattered Wind vane masts indicating that we were already on the power generating wind farm (in full operation since its launch in 2013). Though it was freezing cold (we were dressed in layers), I could feel the sweat build up as I struggled to maintain pace with the rest (I failed, often). My lack of hike-stamina was soon evident when I realised that the only company I could retain was the Ranger responsible for ‘sweeping’ the laggards (er.. just me). The best thing though, was the absolutely magnificent scenery encompassing the hills everywhere. As the mistiness cleared, it was refreshing to marvel at the splendour of the volcanic Suswa Mountain sitting prominent on the far-off Great Rift Valley floor, its black peak rising majestically, posing an enticing challenge for all hikers making their way across the hills. At various points on the hills, depending on the view angle, one could make out the already (or yet-to-be) conquered hills, or Corner Baridi town, or the new skyscrapers transforming Nairobi City Skyline in the far distance, or just behold the awesome expanse of the Rift valley floor everywhere! And since I had my camera in hand, paparazzing made a very good excuse to stop periodically (more like to catch my breath) every so often.

Obviously we weren’t alone on the hills, it was the weekend so there were lots of groups, especially school kids who we would have to step aside into the bushes to allow them pass (or fly) by. What a spectacle to behold: 100s of chattering young ones possibly 8-14 yrs, expertly navigating the rocky paths along the steep sides in all manner of (inappropriate) footwear & gear, ranging from open slippers, to leather shoes, to low heeled stilettos, and mostly without sweaters. They were practically body-to-body (as in bumper-to-bumper), closely following (or more like racing) each other upward or downward, all the while amused at our horrified, ‘slooow dooown’ cries and that of their trailing teachers. They’d respectfully glance curiously, sideways at us as they passed, and without any pause, speed off laughingly in the direction of those ahead. Sigh… wish we could be as carefree! 🙂 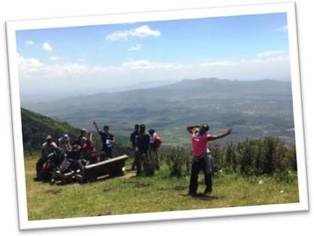 Fast forward to later, we made it one way across the 7 hills in about 2.5 hrs, had our lunch snack atop Lamwia (7th Hill), immersed ourselves in rest, fresh air and self-fulfilling joy of just ‘being’, before we embarked on the return journey, now rejuvenated. Needless to say, tired as I was, I thoroughly enjoyed the experience, and most gloriously on our way back because the air was clear and the sun up. The hills were littered with people lying or sitting on the lush, green slopes, and it was quite a sight to behold the scattered mammoth wind vanes in full view, and their blades rotating in steady motion. We made it back to the bus by 2.30pm (me around 3 pm), everyone jovial with the day’s excursion and looking forward to ‘concurring’ their next feat – Mt. Kenya! I was exhausted, operating in reflex mode of throwing one foot in front of the other, repeatedly, and figured if I didn’t collapse, then I must be getting stronger – I had made it, YEI! 🙂 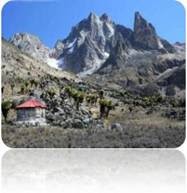 Maybe it was the company, maybe the air, maybe the view… whatever it was, I had sooo much fun I decided… if they can, why not me? Yes, nawesmake, and climb the mountain, too!! What? Am I crazy? YES! Am going… this July, 2016… seriously… 11-15th. Wanna join me? And there are a few other ‘crazies’ in the world… so far, kedo 10!! So, get in touch on phone, text, whassup, email, whareva… Let’s strike this off your bucket list, too and make it this year’s milestone triumph! Let’s go crazy for a bit and do a mountain… Escape!! 🙂